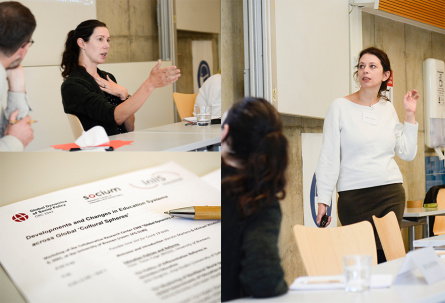 On Friday, October 8, 2021, the CRC project A05 hosted an international workshop on "Developments and Changes in Education Systems across Global 'Cultural Spheres'" in Bremen. The event took place in a hybrid format with about 20 participants present on the scene. For the CRC 1342 it was the first workshop since the beginning of the pandemic that was attended by international guests in Bremen.

The workshop was structured in four slots, focussing on Education policies and reforms, School autonomy, Expertise and skills, as well as Education and culture. Each of the nine presentation was followed by an in-depth feedback by a discussant and an open discussion with the audience.

Patricia Bromley (et al.) from Stanford University looked at global causes for education reforms worldwide by analyzing the changing role of the World Bank and International Non-Governmental Organizations (INGOs) in 147 countries between 1960 and 2017. In this period, Bromley found a sharp drop in the levels of national education reforms. She also found evidence of changing power dynamics: The influence of World Bank loans in promoting education reform declined over time, while the influence of INGOs grew.

Fabian Besche-Truthe, Helen Seitzer and Michael Windzio (all CRC 1342) presented their concept of Cultural Spheres and their influence on the diffusion of compulsory education around the world.  Countries can be tied by sharing a multitude of cultural characteristics, defined by a variety of variables like dominant religion(s), dominant language, colonial history, gender relations, or civil freedom. The result is a fuzzy typology of cultural spheres. The authors’ hypothesis is that the introduction and configuration of state education correspond to world regions and cultural spheres. And in line with this expectation, makro-statistical analysis of the introduction dates of compulsory education shows that cultural spheres considerably mediate the diffusion of compulsory education.

Michael Windzio (CRC 1342) then presented the results of an explorative study on the effects of culture on the gender gap in education, i.e. the probability of women getting only little/low level education. By drawing on the World Value Survey and on its data on secular and emancipative data in particular, Windzio defines eight country classes. His statistical analysis shows that “culture matters” for the gender education gap – countries belonging to the traditional religious class show a higher tendency towards low education, and women in these countries are considerably disadvantaged.

Michael Dobbins (University of Konstanz) and Dennis Niemann (CRC 1342) introduced a refined approach to look at school autonomy by presenting four ideal-types of school autonomy: the civic participation model, the school competition model, the professional (teacher) self-steering model, and the hierarchical (school management) self- steering model. As an example of how to use their ideal types, Dobbins and Niemann calculated the relationship between the school autonomy constellation in European countries and each country’s PISA performance.

Manuel Souto-Otero (Cardiff University) and Piotr Bialowoski (Harvard University) presented their research on how skills prioritisation and conceptions of education (narrow vs. broad) vary by social class. They found that (1) class differences exist and (2) that those in the middle classes prioritise different sets of skills than individuals in the working class and they also conceive education in a broader way, e.g. opportunities to learn are more often associated with non-formal and informal learning contexts.

Aaron Benavot (University at Albany-SUNY) has explored regional and variation over time in school knowledge and textbook content in primary and secondary education and discussed the cultural underpinnings of such variation. Jane Gingrich (University of Oxford) presented on the politics of differentiation reforms in secondary education, and Gita Steiner Khamsi (Columbia University/Graduate Institute of International and Development Studies) on evidence and expertise in educational politics.

Each presentation was followed by an in-depth feedback by a discussant and an open discussion with the audience.