Public Opinion, Pandemic Infection and Policymaking: The COVID-19 Story of Liberty and Death

The WHO declared a Global Pandemic on Jan 30th, 2020, based on overwhelming evidence that the highly infectious Novel Coronavirus SARS-CoV-2 and the deadly COVID-19 disease that it causes threatened all of human kind. Despite this clear message, public and government responses varied dramatically by country, city and even neighborhood. Controlling the spread of any global pandemic requires large-scale, cohesive public responses. As there is no global governance, national governments were crucial institutional actors in the pandemic fight.


In Germany, the national government was quick to push German states to adopt cohesive measures in February, and to then ratchet these up in March as infections exploded in places like New York City and Italy and localized regions and events within Germany. In Figure 1, the dotted line are the deaths from COVID-19 and the solid green line is the degree of government lockdown measures. At least in the first wave, Germany was highly successful at curbing the spread of the virus. This contrasts sharply with Sweden, displayed in the middle panel of Figure 1. 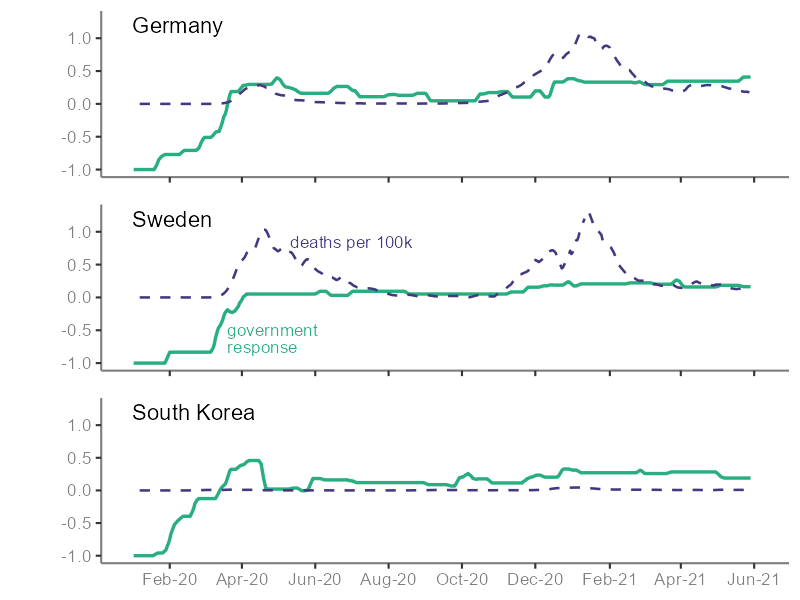 Figure 1. Daily deaths per capita and government intervention. [Known deaths from COVID-19 data from Johns Hopkins and Dong, Du and Gardner (2020) taken as the deaths per day divided by the population in one-hundred-thousands. Government intervention data from Oxford University Blavatnik School of Government measured as a scale of measures from none (-1) to all possible at the highest degree (+1) (e.g., travel restriction, banned public gatherings and stay-at-home orders).]

In Sweden, the constitution prevented lockdown measures in non-war-times. Although the Swedish government encouraged its residents to follow pandemic safety guidelines, the lockdown measures were relatively lax and the infection rate and resulting deaths were among the worst in the world at the outbreak of the pandemic. The Swedish response and even relatively ‘good’ German response paled in comparison to the swift and effective lockdown in South Korea (and most East Asian countries). In the lowest panel of Figure 1, the deaths per capita stays nearly at zero and remained there until the time of writing this.

Government response is not the only factor as made clear in the second wave of infection starting in October of 2020. Germany and Sweden had similar death rates in the second wave with a slightly stronger government intervention and slightly less deaths in Germany. However, in South Korea government lockdown was similar to Germany, but they had fraction of the infections and almost no deaths.

Government response is simply a method to control public behaviors. Ultimately the public are the arbiters of infection, and their behaviors explain different outcomes where governments take similar control measures. In Wuhan Province, China the public had little control over their behaviors as they were confined to their homes, subject to biosecurity protocols and 'policed' by both actual police and Communist Party-led neighborhood watches for at least 76 days. The lockdown halted the infection and death rates locally, but the virus had already hopped China’s borders leading to the pandemic. By contrast, once arrived in countries like Sweden or the United States, the residents were mostly free to behave as they pleased. The fate of the virus spread was essentially in the public’s hands because their behaviors - movements, contacts and (lack of) awareness - provide the only way the SARS-CoV-2 virus can spread or not.

This means that especially in liberal democratic systems where the governments cannot easily impose lockdown measures, studying human behavior is essential to understanding how to fight a pandemic. Social scientists regularly observe a correlation between sentiments and behaviors. The public forms attitudes toward 'the virus' and 'a pandemic' from the news and word-of-mouth. Therefore, the contents of media messages play a major role in shaping behaviors indirectly through the information contained in news and editorial articles.

What is also striking about Figure 2 is that infection rates in Germany show a weaker correlation with media sentiment than in the United States. This is most likely due to stronger government intervention in Germany, whereby individuals have less control over their decisions, or at least will face criminal punishment for not following government guidelines. The apparent association between media sentiment and infections should be caused by public behaviors, but cross-national behavioral data are scarce during the pandemic. However, during a brief window of opportunity from March 15th to April 7th, 2020, Thiemo Fetzer and colleagues fielded a survey asking about precautionary public behaviors in at least 80 countries. Figure 3 compares behaviors with average media sentiment in the last week across these countries and demonstrates a clear correlation between more positive sentiment in media contents and less precautionary behaviors. 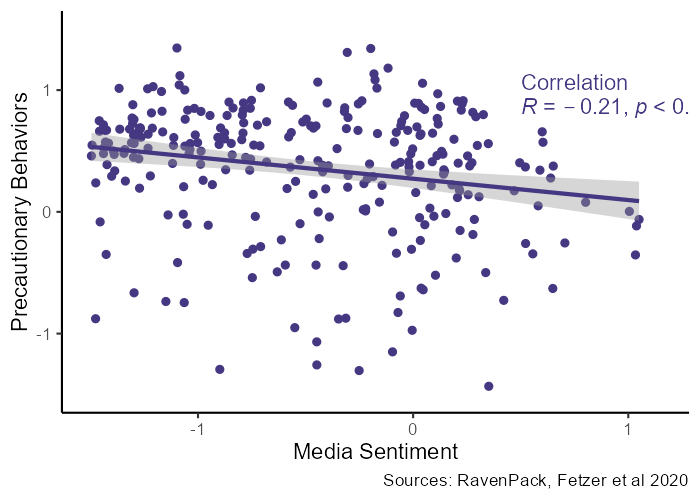 National governments are in a tough position during pandemics. They cannot enforce lockdown measures beyond a certain 'breaking' point, or the public will simply rebel or ignore them in such large numbers that enforcement becomes impossible. It is therefore not unreasonable to conclude that at least in liberal democratic regimes, the most effective pandemic prevention measures, like those taken in Wuhan, are simply not possible. The old adage 'give me liberty or give me death' might therefore be reframed as 'give me liberty and death' in pandemic times.

Data and code available at GitHub/nbreznau/covid-liberty-death 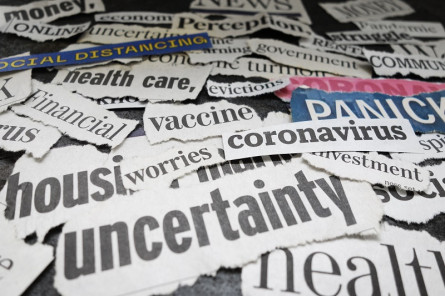