The international roots of the New Deal 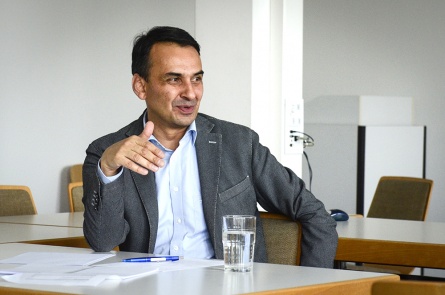 Two years have passed since Kiran Klaus Patel, Professor of European and Global History at Maastricht University, published his book "The New Deal: A Global History". Nevertheless, Patel was happy to discuss it with members of the CRC 1342 on Wednesday. To look at one's own work after a certain time and at how it was received by colleagues is very revealing, Patel said.

So what is Patel's book about, which is said to have originated in an evening in a Zurich bar where Sven Beckert ("Empire of Cotton") and Kiran Klaus Patel sat, drank, discussed, and at the end of the day Patel went home with the idea of critically examining the myth of the New Deal for a book series published by Beckert? "The goal was to write American history differently," says Patel today, "to provide an alternative to traditional historiography." The New Deal, which was embedded in time between the global events of the Great Depression and the Second World War ("sandwiched between", as Patel so beautifully called it), is traditionally interpreted in the USA as a purely nation-state affair. In his book, Patel shows that the USA, with its economic and social reforms, is by no means an exception or even autonomous. There were very similar developments in many other countries at the time: "And with the New Deal the US was pretty much in the centre of the spectrum of political options," says Patel. Thus, the New Deal was by no means unique, but despite its mediocrity it was a game changer that laid the foundation for the leadership and international dominance of the US in the post-war period, Patel said.

The New Deal was not a stand-alone work of Roosevelt's government, but was created under the influence of international relations, which Patel documents in his book. Many scientists who advised the US government had previously studied in Europe. In addition, social policy experts from Europe were invited to present their views and experiences. Among them were scientists, especially from Sweden, who had previously studied in the USA and thus knew exactly how to successfully sell their ideas in Washington.

Of course, the USA did not completely take over the social and economic policy programmes of other countries: they chose elements that they considered appropriate from the portfolio of social policy options ("selective adaptation"). The result was the Social Security Act in the United States, which mainly addressed white male workers - much like in most European states.

After Patel had presented the most important arguments of his book, the question arose as to why the US had adopted certain social and economic policy elements, especially from Europe, but not promising variants from other regions of the world (e.g. Latin America and Japan). Patel explains this mainly with two arguments: On the one hand, existing, established links and networks of actors from politics and science had played an important role; on the other hand, the perception of kinship between the USA and Europe had played a major role, which also had racist elements: the decision-makers lived in a white, Eurocentric world.

At the time, the USA was not afraid to examine dictatorships including Nazi Germany for suitable social and economic programs. Patel explains this with the then widespread modernist assumption that political programs and instruments could be separated from the ideology of a state.

Patel was asked why he did not or only to a limited extent consider the question of power in his analysis of the New Deal. Patel replied that he had deliberately done so because otherwise the international relations and influences on the New Deal, which form the core of his book, would not have been given enough space.

Two years after the book was published, Patel self-critically noted that his book did not explain the New Deal and its origins in an exhaustive and comprehensive way. The quantitative dimension of the analysis is not sufficient, he said, and not only the New Deal itself but also Patel's own work has a European bias: Asian influences, for example, could be given much greater consideration, as could the role of local administrations and US states.