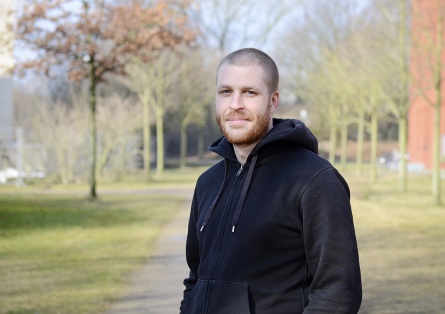 Dr. Nils Düpont
Nils Düpont spent several weeks in Göteborg for project A01 in order to foster cooperation with the Swedish democracy research institute. In an interview, he tells us what he expects from it.

One of my tasks at the CRC is to collect information on national and especially political variables. My personal interest is above all in the parties and their ideology or positions and the question of what influence this has on the introduction and spread of social policy. So far, there is little data that reaches back far or has a global scope. For this reason, I had begun to work with Holger Döring, a colleague at Philip Manow's chair, to collect data, first on election results and parties in all the countries we study at the CRC - from 1880 until today. Holger had been in contact with Anna Lührmann from the V-Dem team for some time. She is Deputy Director there and had initiated a new project where they wanted to go all the way to the party level in their investigation. It quickly became clear that the data that we had collected at the CRC, most of which had already been validated, was actually the basis for what V-Dem had in mind. And it was through this connection that the cooperation came about.

So what does the CRC contribute to the cooperation?

We provide information on elections, parties and election results from all over the world since 1880. These data form the basis for the V-Party project. And on the basis of this data it is also controlled for which parties and which year the V-Dem experts subsequently receive questions about the parties, their ideology and their organizational characteristics.

And what does the CRC get?

The decisive thing is that this is the first time that we will receive information about parties' ideology or some organizational characteristics that have not yet been the focus of party research. In party research, too, we have a relatively strong OECD bias - similar to the social policy research of the CRC. Latin America is still relatively well covered. But as soon as you look at Africa or Asia, it becomes scarcer with expertise, information and analyses. And the nice thing about V-Dem is that they have this global network of experts, that the survey has been running for a few years now and that we also get to work with experts who assess parties for which we still have little or no information. This information helps us to assess the parties ideologically in the first place. And together with the information we collect about, for example, strength in parliament, independent variables can then be created for social policy research and the question: What influence do parties have on the introduction or expansion of social policy? In sum, we get information back for the CRC, which we can test as variables in the style of partisan politics.

What did you actually do in Gothenburg at V-Dem?

Essentially, we discussed a few things conceptually and harmonized the data we had collected so far. We then sent these preliminary data to country and regional experts for a validation check. All in all, we were able to lay the first foundation on which we are now building.

Who did you work with in Gothenburg?

Essentially with Anna Lührmann, who also heads the V-Party project. V-Party is based on V-Dem, the methodology and the whole setup. The special thing about it is that V-Dem has always been based on a macro-quantitative country/year logic and that V-Party is the first project that looks into countries, one level lower. This, of course, brings with it its own difficulties in collecting data. But the time was ripe to try it. Anna Lührmann as project manager is the central figure that also holds the network of experts together.

What can we expect from the survey?

The preparation for the survey is now entering the hot phase. After the plausibility check and validation by the regional experts had been completed, we incorporated the feedback and practically finalised the data collection. At the same time, the technical stack is being set up so that the survey can be rolled out in January. The last experts are currently being recruited for this purpose. They can then log on to a web platform and see the relevant information. It is therefore very important that the raw data is correct so that the coder can see what is right and what can be done with it. If all goes well, the survey should be completed in January. Then the usual process begins for the V-Dem people: data cleansing and preparation. We hope that in spring of next year the data will be ready so that initial analyses can be made. And that we will then learn a little more about parties in the world about which we know little or nothing.