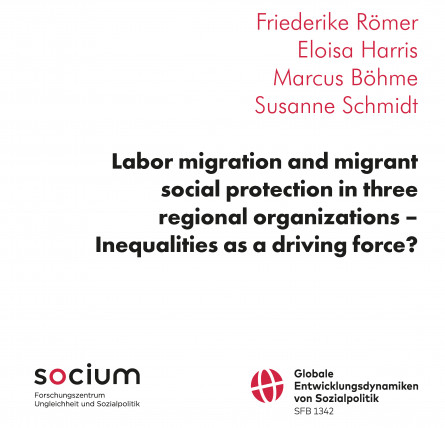 A team of authors from project B04 has investigated how ASEAN, the EU and Mercosur regulate labour migration and which social policy rights are granted to migrants. Intraregional inequalities are an important factor in this context.

Almost two years ago, the SOCIUM SFB 1342 Working Paper Series startet with a paper by Armando Barrientos. In the meantime, the 20th paper has been published, in which Friederike Römer, Eloisa Harris, Marcus Böhme and Susanne Schmidt examine how ASEAN, the EU and Mercosur regulate labour migration and which social policy rights are granted to migrants: "Labour migration and migrant social protection in three regional organisations - Inequalities as a driving force?"

The team identified milestone agreements for each organisation on free movement and/or access to social protection for intra-regional migrants.  In a next step, the level of inequality between member states was measured for different points in time, both in terms of GDP per capita and social expenditure.

In the ASEAN region, overall regional integration in regard to labour migration between member states is limited, the authors write. Existing agreements are non-binding and patchy, and intra-regional migrant workers are mostly excluded from measures of social protection.  Net receiving states (in terms of migration) are opposed to agreeing on measures of social protection that would potentially drive up wages and induce other costs.

This low level of cooperation on migration and social protection is accompanied by very high intra-regional economic inequality and a lower but still large inequality in social spending among member countries.

Mercosur on the other hand can be characterized as promoting a very far reaching ideal of free movement and open borders, conceptualizing migration as a human right, which includes the decriminalization of undocumented migrants. Since 1997 citizens of Mercosur states can transfer social security rights acquired in a member state to any other member state. In 2010 a citizenship statute was signed which is intended to enforce freedom of movement, equal treatment with regard to civil, social, cultural and economic rights and equal access to work, health and education.

In Mercosur, economic inequality is the lowest compared to ASEAN and the EU, but it has increased slightly over the last two decades. A similar trend can be observed in inequality of social spending.

Compared to ASEAN, but also to Mercosur, regional integration is most extensive in the European Union. In the course of enlargement, however, economic inequality has increased significantly. The differences in social expenditure are lower in comparison, but still relevant. Overall, EU enlargement increased the incentive for workers to migrate to the wealthier countries. Subsequently the interpretation of EU citizens' rights in the Europen Court of Justice has become more restrictive and the project of "Social Europe" has come to a halt. Nevertheless, the authors conclude, stagnation rather than reversal characterises the current state of affairs. Strong path dependency continues to keep existing far-reaching agreements in place, making the EU still the most integrated of the three organizations compared in this paper.