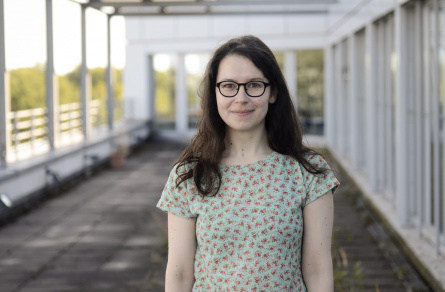 Fabienne Müller
After a few years in diplomacy, Fabienne has returned to university. She is doing a PhD in history, researching US trade and social policy since 1970.

Dear Fabienne, you have been a member of CRC 1342 for two months now - what did you do before that?

The last few years I was in Warsaw, where I worked at the German Embassy, in the area of culture and public relations. I prepared programmes for cultural events, drafted letters and looked after delegations. It was a leap from university into practice.

What had you studied before?

I had studied political science, administrative sciences and Spanish philology at the University of Potsdam - Bachelor and Master. Then I received a scholarship for another Master's programme.

Where and what did you study then?

European Interdisciplinary Studies at the College of Europe in Warsaw. The main campus of the university is in Bruges, but since the 1990s there is a campus in Natolin, a district of Warsaw.

What languages were the courses in?

English and French. But I also wanted to learn Polish, because I had already started a language course in Potsdam - that was another reason to go to Warsaw.

How long did you live there in total?

The Master's lasted one year, and after that I was at the embassy for five years. Until June of this year.

When did you decide to go back to university and do a PhD?

That was always my wish, because I liked my studies and the theoretical work so much. Directly after graduating, no suitable opportunity arose, so I applied for other positions, also to get an insight into diplomacy and the work and structures of the German Ministry of Foreign Affairs. In the long run, however, I always wanted to return to academia and go more in-depth in terms of subject matter. Working at the embassy requires you to quickly familiarise with changing topics. That was an important experience, but I wanted to work on a topic in depth again.

You studied political science, but now you're doing a PhD in history. How did that come about?

I was always interested in subjects adjacent to political science. During my Bachelor's degree, I took courses in history and the history of political ideas as a specialisation, just as I did in my Master's degree in Potsdam. And at the College of Europe, European history was my specialisation.

How did you hear about the position at the CRC?

I have a friend who is doing her PhD at the University of Bremen and she told me about the CRC: "Take a look, the CRC brings together political science and history, that would be a good fit for you." I then clicked through the website and read about the first phase to see where I could tie in and then came across the job advertisement for the project on social policy and protectionism and applied.

You've only been in Bremen since July - have you pinpointed your responsibilities in the project yet?

We have already met a few times in the team and decided which of us will study which country and which time periods. I will be taking care of the USA, specifically the time period from 1970 to the present. From a historian's perspective, that's quite a long period. That's why I'm currently busy reading up on it. I am also reading about the period before that, which my colleague Fritz is in charge of, since the events and decisions in the decades before that obviously provide the basis for social policy in the period from 1970 onwards.

You share your office with Fritz Kusch and Fernando Vinueza, who are also PhD students at the CRC and work on related topics: Have you set up something like a reading circle or book club?

We don't read together, but we have built up a steadily growing library in our office, which we are currently working through. If we notice something that fits in with each other's topics, we bring it to each other's attention.

Do you already have plans for your dissertation?

Yes, I would like to work on the history of ideas, as that fits in with my studies. I am currently trying to work out the major mechanisms in US social policy since the 1970s. If the literature and sources allow, I would like to examine exactly what has significantly influenced US pension policy since the 1990s - given the upheavals in the history of ideas.

Do you want to do a cumulative PhD or write a monograph?

I think I will choose the monograph format. We all work that way in the team, and it is still the most common format in the field of historical studies.

What are your plans for the future: do you want to stay in academia or go back to practice?

The next three and a half years are a very long period of time, which is why I cannot yet see what will come after that. From today's point of view, I would be very happy if I got the opportunity to continue working in science.