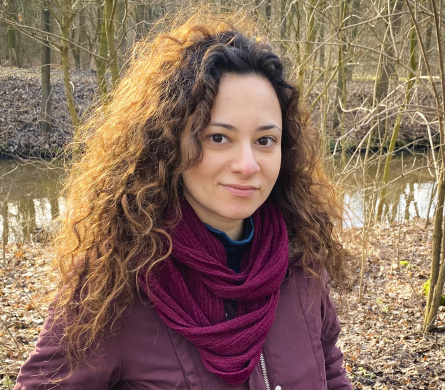 Mai Mahmoud
Before her Master's in International Relations, Mai has worked for Egyptian NGOs focusing on social policy and human rights. For her PhD, she now wants to study the influence of International Organisations on health policies of countries in Northern Afric

You did your Bachelor Degree at the British University of Egypt. Why did you choose this university back then?

I had a couple of options, but the British University was the most research oriented and its cohorts of students were smaller. Additionally, it offered me the opportunity to earn a certificate with Loughborough University. The programme tried to accommodate both the Egyptian and British systems. It included a prep year and three years, but it was a four-year study program. It was really diverse and covered the politics of all major regions of the world.

Did you start your Master’s programme straight after you had finished your Bachelor?

No, I wanted to gain some work experience first and I had an inclination to do something related to development. That’s why I joined NGOs focusing on humanitarian and developmental issues in Egypt. I worked with refugees in different spheres, I gave legal advice, and was counselling survivors of sexual based violence as well as case management for children facing social or security problems. After that 2-year-period I felt I was ready to go back to university and started my Masters programme in Bremen.

Why did you chose Bremen for your Mater’s?

Well, I got accepted at different universities for different programmes – studying in the UK was an option, but at that time the Egyptian Pound has lost much of its value so that the programme fees in the UK became pretty much unaffordable. In the end, I chose International Relations in Bremen because I have heard a lot of good things about the city and its university and the IR programme was very research oriented, interdisciplinary and fit my interests in NGOs, IOs and development.  In addition, the program was tailored to those who wants to continue in academia which was something on my mind from the beginning.

What did you write your Master’s thesis on?

It was about the labour market changes and the role of the crony capitalism and neoliberalism in Tunisia after the Arab Spring. Crony Capitalism is not very known terminology but another equivalent is patrimonial capitalism, where the state and the business sector are intertwined through personal relations. Before the revolution the regime has used this crony capitalism to run large parts of the economy. There was a lot of research about the effects of crony capitalism on the economy, but not much about its effects on the labour market and unemployment. That was what I looked into. It was hard due to corona and the travel restrictions – I could not do as much field research as I had planned to do.

What was your main findings?

Crony capitalism had a negative impact on labour market in Tunisia. This is due to its focus on non-productive sectors (that were an interest to crony system) and informal workers. As a result, it deprived the youth with university degrees from finding formal jobs adequate to their qualifications and deteriorated job creation. In addition, it did not give a room for small business to thrive due to competition with monopolies. All this contributed to increasing rates of unemployment. This impact was still significant after the revolution (despite the democratic transition and regime change). Until today, crony capitalism plays a role in employment; monopolies created by cronies employ family members similar to the pre-revolution period. Similar practices are continuing and negatively affecting fair chances to find formal job opportunities.

Yes, the link of social policy and development matches my interests very well. I was working as a student assistant in this project for one year already. During this period I was able to co-author a working paper on the introduction of health care systems. I worked as a student assistant in other CRC projects, which brought my interest and attention to different social policies during my master studies. I was specifically interested in the health systems developments. Additionally, I had the idea of doing a PhD on my mind, I wanted to continue in this direction. The fact that the project has a quantitative focus is very interesting to me – I have done some work in this area but I want to acquire much more knowledge about quantitative methods.

What will your role be in the project?

I will focus on the data collection and analysis, besides some administrative tasks like managing student assistants and the social policy country briefs series. In regard to the data collection, we are now collecting data on the legislation throughout the years. In the first phase of the CRC, the project was looking at the health systems at their point of introduction. Now we want to analyse how these systems have developed over time – which social groups are covered and which scope of benefits are provided. And in order to do this, we have to collect the health care legislation texts. After that we want to use artificial intelligence to further collect all the body of legislation as it will take time manually. The data will be analysed quantitively using regression and network analysis.

Have you got plans for your PhD thesis already?

Yes, although it's not quite complete. I want to look into the role of International Organisations in the development of health care systems, especially in the Global South (especially in the Middle East and Africa). It will be difficult to access data, but I think it's worth the effort: There is not much literature on this region and it would be great to contribute to filling this gap. I would like to focus on the World Bank, the World Health Organization and the International Monetary Fund and their influence on countries in North Africa.