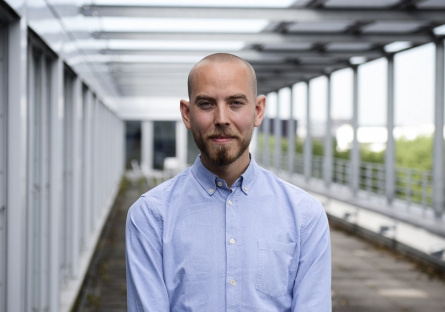 Dr. Jakob Frizell
Jakob is an expert in peace and conflict research. In his doctoral thesis, he investigated whether and how governments have made wealthy population groups pay for the costs of war.

Jakob, you have specialized in the area of the political economy of armed conflicts. What has sparked your interest in this topic?

I have always had this interest, coupled with an interest in poverty and development. From an early age I got this realisation that there might be a connection between conflicts and underdevelopment. That sparked my academic interest. When I decided to go to university in Lund, I thought: Let’s start out with what I found to be the most interesting course of all to see if that is fun and then continue in that direction. So I started with a peace and conflict studies course in Lund.

Was that during your Bachelor or Masters programme?

During my Bachelor programme. In Sweden, you can pick and choose courses as you want, so I picked peace and conflict studies. And it was even more interesting than I had thought. It wasn't a big plan but in the end it got me into the trajectory of studying peace and conflict.

Did you then specialise in this field during your Masters?

I studied in a – some may say: weird - reverse order. I specialized very much in peace and conflict studies during my bachelor's and also pursued some studies in economic history as I am very much interested in these big political economy questions and secular developments of states. But then I chose a rather broad political science masters, which was very good because then I really got to know the wider theoretical tools of political science. But my passion has always been peace and conflict research, political economy and economic history.

Well, the short answer is that they used to do, but they don't do anymore.

I studied in Lebanon for a semester, where I realized that post-conflict society is not only about ethnic animosity, but also a lot about the social and economic issues that come in the aftermath of a conflict. At the same time, I started reading up on this big political economy and historically focused literature based on the experience of total war in Europe and North America. It really fascinated me to see that this war triggered an expansion of progressive taxation and enormous redistribution from the rich to the poor. There were very strong fairness arguments that pushed in this direction. What I learned from Lebanon was that the fairness demands or notions of unfairness were as strong as for example in France during the Second World War. That triggered my interest. I wanted to see if I could apply these theories based on European and North American World War I and World War II developments to the contemporary world and to civil conflicts as well.

To get back to your question:  What I found was that in fact, you could see very much the same patterns during the Cold War in developing countries all over the world. Namely that wars - whether civil wars or interstate wars - trigger demands for redistribution. And demands that were actually followed by governments introducing sometimes astonishingly progressive taxes. In this sense, the rich also had to pay for the war - not only in Germany after World War II, but also during the civil wars in Mozambique or El Salvador in the 1970s and 1980s.

But did you find that this progressive taxation really had a redistributive effect or did the rich manage more or less to evade it?

Well, you pinpoint the main weakness in my thesis right way! I am not an economist, I looked quite cleanly at policies rather than at the economic effects of it. In the end, that's something I would like to do in the future: to see if this actually has a repercussions on, for example, the Gini index. But what I could see with the little data I managed to collect was: often these taxes were actually effective. If it was the richest people who got to pay, that's a more difficult question. But most of the time, these taxes were actually very efficient, and I think that's interesting, given the widespread notion that these taxes are near symbolic especially in developing countries.

You have compiled quite large data sets on the taxation practices of about 60 or even more countries that were affected by conflict. Could you describe these datasets a little more?

In order to investigate the question of my thesis, I really wanted some hard data. You can always questioned the validity of this data, but I want to have some kind of a baseline to proceed from. So my idea was to collect data on top income tax rates for all countries that experienced major armed conflicts in the post-world war II era.

Did you look at the years after conflict or the years during conflict as well?

I actually looked at all years – before conflict, during and after. I picked a sample of all countries that had experienced conflicts, but before 1960 is extremely difficult to access data because it was only in the early 1960s that the IMF started to make detailed reports that often but not always included some information on tax rates. My thesis supervisor Philipp Genschel actually warned me from the beginning to start such a big data collection project, because he knew how difficult this would be for countries outside the OECD. But although it took a lot of time, it was very gratifying. And in the end, I learned much more from reading these old IMF reports than from reading second-hand literature. In the end it was really worth the effort to go down into the archives - even if you spend a week just wasting your time and not finding the data point you're after, you do find some additional things and it enriches you.

In this way I found out about war taxes. Initially I was only planning on collecting data on top income tax rates, but then in these reports I found very interesting taxes hiding in the footnotes, which were dedicated to reconstruction, for refugee aid or for the war effort. In the end, I started collecting data on these kind of taxes, too, and I got a global data sets on these. I used it in my thesis and I'm also trying to publish something on that separately now. The origin of this dataset was somewhat of a random discovery. But with it, I can answer some important questions about the political economy of war-affected countries.

This sounds like a perfect preparation for the work you will be doing here at the CRC because such thorough data collection is at the heart of most of our projects. Which leads me to the next question: What made you come to Bremen?

I have been working a little bit with Laura Seelkopf, who was on the CRC team in the first four years, so I became aware of all this massive data collection that was going on here. I then talked to Carina Schmitt who told me a lot about her project, and this sounded very interesting: After four years only focusing on taxes, I felt done with it. But I did not want to let go the political economy and policy consequences of conflict. So when Carina basically offered me on a plate this fantastic data that you had on social policies and the possibility to look at the connection between civil wars and social policy, I thought that this was an ideal continuation of my PhD research. Academically there was not much to think about, it was a fantastic opportunity.

What is your role in project B10 now?

Obviously I am not the social policy expert, I will leave the lead on that to others. My expert knowledge is on civil wars and contemporary conflicts in general. Therefore, I think, I will take responsibility in the conflict side of things, particularly when it comes to civil wars. And I will do a case study on Angola, which I've been working on a little bit before, which is going to be really exciting. I really like the ambition in this project of mixing macro analysis with the case study approach. I'm also trying to assemble a data set that somewhat more accurately than what now exists measures the intensity of contemporary wars. That's the ambition, and hopefully we can achieve some “revolutionary” analysis on the policy effects of war.

What are your plans for your academic career in general?

First and foremost I hope that I get the chance to continue to spend a lot of time doing empirical research, and to be able to combine the said interest in the big questions of political economy and state development with the actual issues on the ground of war-affected countries - always with some kind of normative grounding. Right now, I'm just super happy that I have for years ahead of me where I can focus full heartedly on these issues.